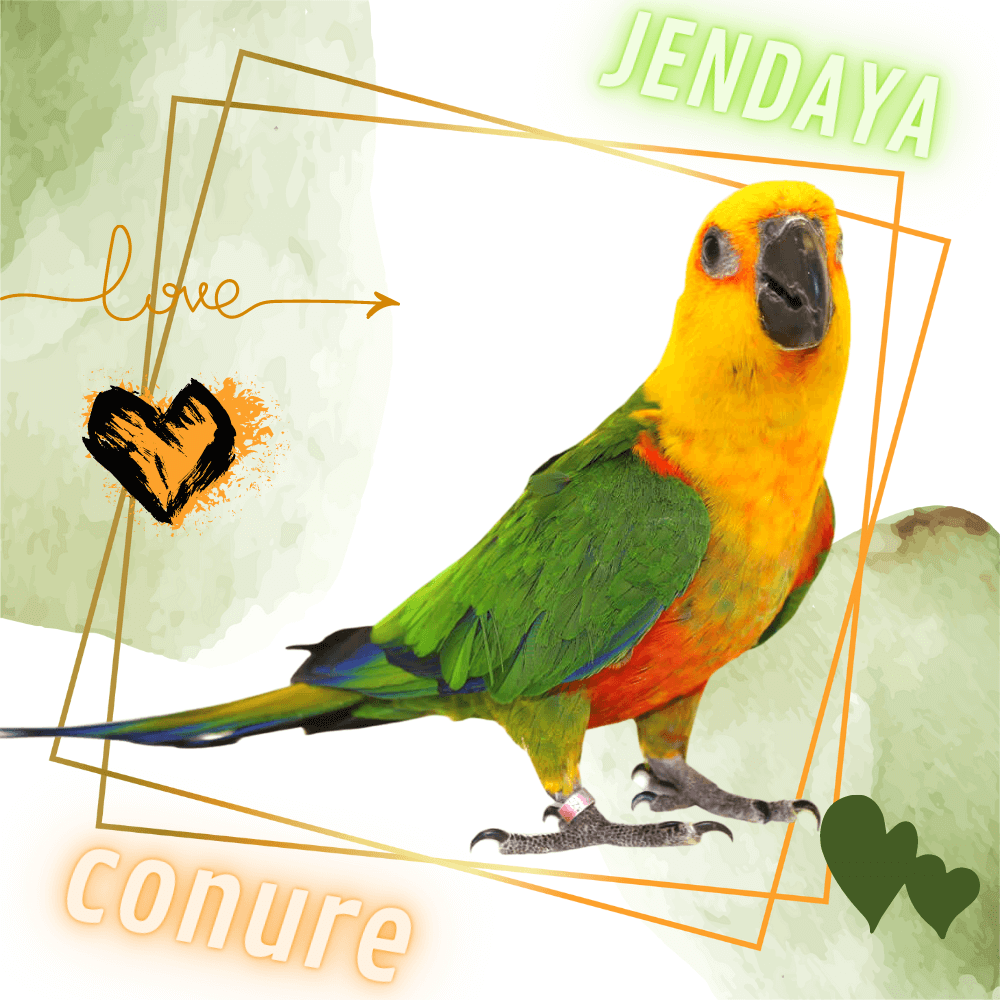 Jendaya conure: Very colorful parrot, the head is yellow, the belly red-orange, the wings green with blue regimes, and the beak are black. The young resemble the adults, except on the level of the head, which is duller with small green spots, the top of the body is also a little duller.

CITES Appendix II. Jendaya conures have adapted well to the expansion of human civilization, this species is not considered threatened.

Life in the wild

Originally from Brazil,  they are found in primary forests in limited distribution areas.

It is a species that adapts with difficulty to life in captivity, although physically robust, they are sensitive birds, extremely noisy, and do not support life in restricted spaces.

Invisible in young birds as well as inconspicuous in adults. The male often has a slightly larger bill than the female.

The female lays 3 to 5 eggs. The young leave the nest around the age of 2 months and are weaned a few weeks after fledging.

Its life expectancy is estimated at 25 -30 years.

They are small parrots with strong temperaments. They are very active and often express themselves in a loud and unpleasant way. Like all conures, they are very social and enjoy living in small groups. Despite their small size, conures look like large parrots. Indeed they are not afraid of anything, learn quickly, and are extremely playful and curious. They adopt several attitudes that make them very touching, with their big yellow heads and very expressive eyes.

Pet parrot enthusiasts are drawn to these conures because of their colors, strong temperament, and ability to make excellent playful and affectionate pets. Conures can become very close to their owner, sometimes even exclusive. They are very tactile and appreciate caresses all over their bodies. Many conures seek to squeeze under clothing and like to snuggle up to their human’s neck.

Jendaya conures are very active. They need to fly and explore their environment for several hours a day. 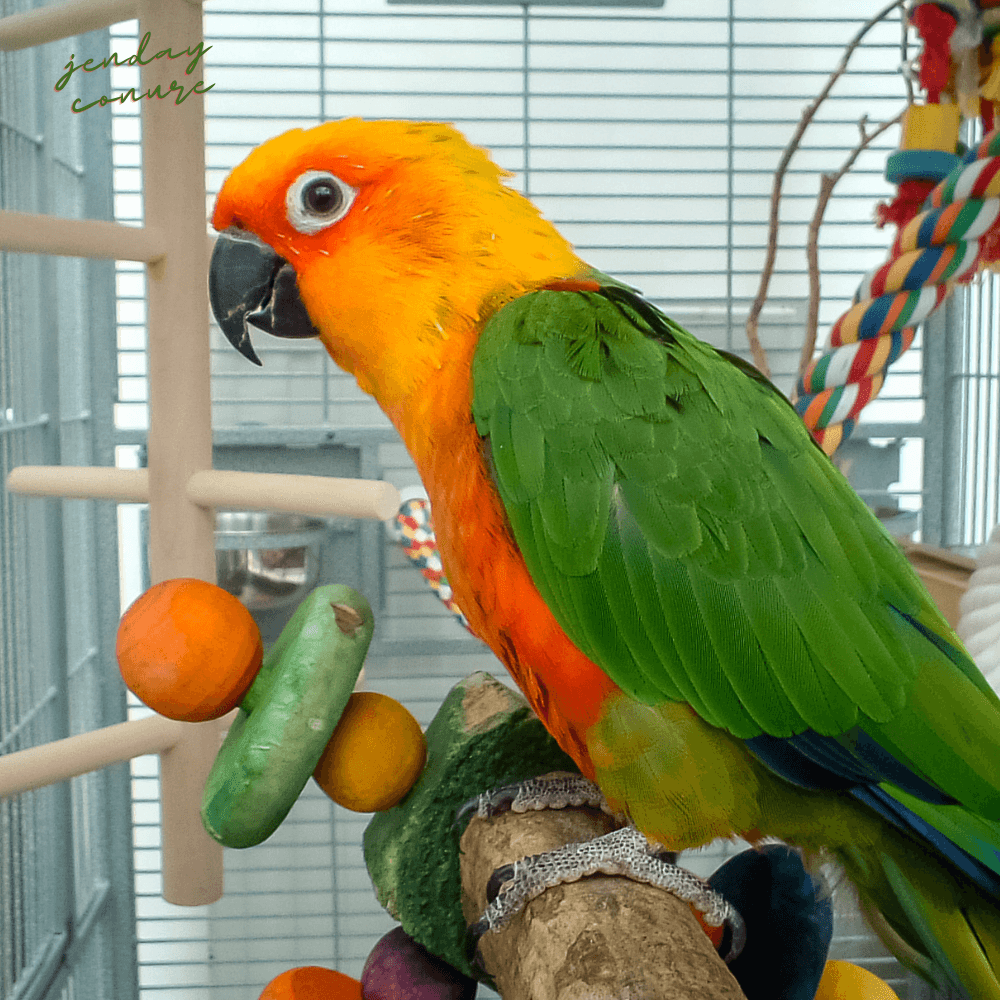 To keep it in an indoor cage, the Jandaya needs a large volume (minimum 80x50x90 cm), so that the birds can spread their wings without touching the walls of the cage.
But do not dream, in such small volumes, without daily outings around the house, the Jandaya will not be fully developed and may develop psychosomatic diseases.

The cage should contain plenty of toys (preferably wooden), climbing areas, and materials for beak and claw wear.
He also likes paper and cardboard boxes, paper tubes and paper towels, long chains, and bells or other “musical instruments”.
Beware of synthetic objects that can obstruct his digestive tract, suffocate him, or ropes whose braids are too loose (claws can get stuck in them).

Many individuals, males, in particular, tend to become territorial and aggressive with other individuals (humans and birds) upon reaching sexual maturity. Cohabitation with other species of parrots can be problematic …simply because conures are fearless and do not mind attacking a larger bird, at their own risk!

Paradoxically they can bond closely with any species, but newcomers will rarely be welcome initially. Conures are specialists in flying, repeated, and violent attacks. This is also one of the first causes of abandonment of these birds because they can do the same with humans.

Despite their small size, these parrots need exercise, especially outdoors in an aviary, or even better, in free flight. If they stay locked up too long, they will indulge in other highly unpleasant surrogate activities such as shouting or performing various stereotypes.

As you will have understood, like the majority of species, these conures do not thrive in a cage or other confined space.

The other reason that drives many owners to part with their conure is their cry. Aratinga conures are the loudest and can put humans and household pets through hell. Their cries are powerful (100 decibels) and especially frequent!

Conures are real talkers and therefore express themselves naturally very often. It is better to have your ears well hung up, and above all to offer them the opportunity to live outside rather than in your house… unless your neighbors are too close to your home!

They are very hardy parrots that rarely fall ill if their environment is well-maintained and their food is varied. Fed with seeds, if these birds do not exert themselves enough, they tend to develop liver problems which can encourage abnormalities in plumage, and skin… causing the birds to mistreat their feathers (over-preening, pecking, mutilation). This species, like all South American species, is susceptible to PDD. It is essential to have a young bird tested before any adoption.

Someone who already has enough experience with parrots, genuinely dedicated, passionate, and motivated.  Put in inexperienced hands, these conures are likely to develop serious behavioral problems, they can become very noisy and aggressive. They are therefore not suitable for beginners or people living in apartments or having a family life with young children (because of the loud cries and the risk of bites).

No comments to show.